Last Friday, August 1, 2014, the first fan meeting of K-Pop group BTS in South America happened in Brazil. Titled ‘RWeL8?’, the event took place in Via Marquês, a venue in the city of São Paulo.

The day was hot, but this didn’t discourage the fans outside the venue, who were organized in two different lines, one for the VIP area and one for the standard section. The process of assigning numbered wristbands ran smoothly, with the attentive staff helpfully informing the public and the press.

Members of the press were taken to the balconies and, around 17:30h, fans were entering the venue. Expectations were high with everyone trying to be as close as possible to the stage. The venue got filled with people and the moment to see the group grew closer.

The lights went out. Screams resounded when the big screens started showing an introductory video of the group. When the members themselves arrived on the stage, the screams got even more euphoric. The group opened with an explosive performance of No More Dream, following with We Are Bulletproof Pt.2 and, after quick individual greetings in Portuguese, the track N.O. BTS executed each of the performances perfectly, with the dancing, vocals and precise raps for which they are known. The array of lights and images on the screen followed the songs accurately, sometimes showing the names of the members during their parts, along with lyrics and animations specially prepared for the show. 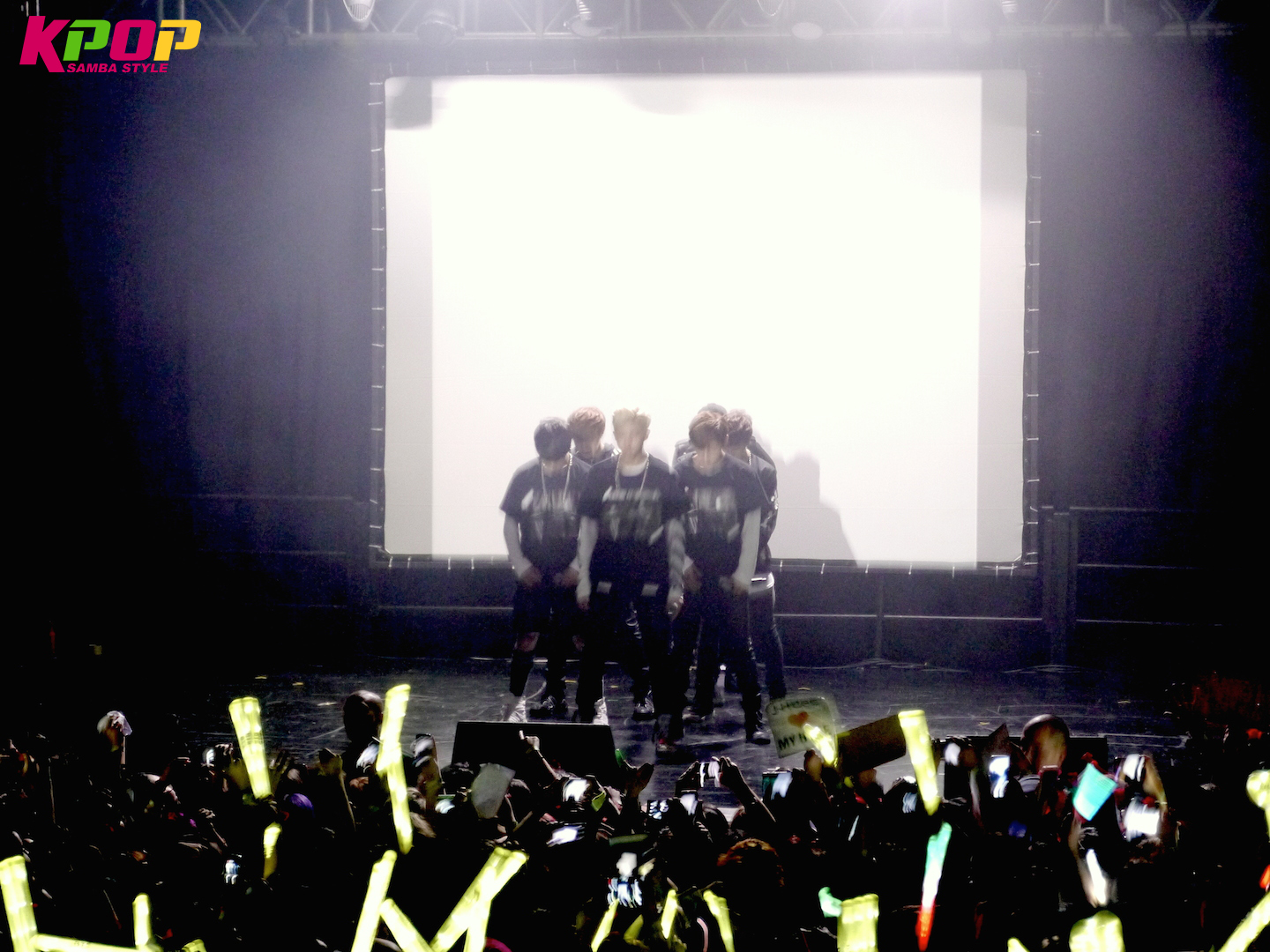 After the first three initial performances, the group withdrew from the stage and a new video started showing on the screens; at the practice room of Big Hit, Rap Monster talked about how the members prepared arduously for this tour (the tour that brought BTS to Brazil also includes cities in Europe and North America). He then walked over to where Jin and Jimin sat on the floor studying English. The two greeted him wittily in order to show their skills with the language. But, when Rap Monster told them they would have interpreters at the shows, the two got excited and happily dropped their studies.

The video continued with Rap Monster finding V and Jungkook elsewhere in the room. The camera shows the two researching images of Brazil, with pictures of the statue of Christ the Redeemer, beaches and women on an iPad. V promptly hid the results when Rap Monster approached. Rap Monster then joined Suga and J-Hope for a quick rapping practice, which concluded with them doing a funny dance.

Rap Monster then says that they also practiced their old performances again for countless times, and that no matter how many times they do it there’s always room for improvement. The video ends with the whole group rehearsing in the practice room.

After the video ended, Babi Dewet took the stage. The charismatic MC of the event introduced herself and welcomed BTS back. They had different clothes from before and were now wearing their familiar blazers.

After the members introduced themselves in Portuguese, what followed was a short interview about their initial impressions after arriving in Brazil. Rap Monster said he’d like to visit the Christ statue and Copacabana beach. Jin said that despite the fact why haven’t been there for too long, he could already “feel firsthand that Brazil is the country of passions” and that, from kids to adults, everyone has a lot of passion in their hearts. Suga commented how he heard that Brazil has many hot girls and, while taking a look at the audience, said he was able to confirm it personally, which made fans go crazy.

In the first part of the fan meet activities called Q & A, the staff brought to the stage a panel with many stickers containing questions by fans. Each member had to choose one and then act or answer whatever was written on the sticker.

V went first. The sticker he chose asked him to express his happiness when seeing Brazilian fans. V did a funny sexy dance that pleased everyone at the venue. Suga picked up a sticker that asked him to dance samba, which he did enthusiastically, accompanied by lively singing from the other members. When his turn came, Jin had to show his love for the youngest, Jungkook. Jin promptly carried him on his arms, producing more screams from the audience. The sticker Jungkook got asked him to sing a song. He sang a bit of Miss Right a capella, with fans singing along the second half. Rap Monster had to demonstrate what he did when he​​ arrived in the country. He portrayed himself waking up disoriented when the plane landed and, after realizing that they had arrived in Brazil, jumped around cheerfully. Jimin had to show how it felt to be loved so much by Brazilian fans. He said he would show his feelings with his body, which got everyone agitated expecting him to go beyond the call of duty and show some skin, but he just bounced on stage and did a cute dance. Finally, in response to “what do you eat to get so beautiful?” J-Hope explained that he “eats the love of the fans”, making the venue shake with excitement.

The next activity, titled BTStyle, had Jimin, Jin and V randomly draw the number of three fans that went up the stage. They would have to make up a beat on the fly using iPads, while J-Hope, Rap Monster and Suga did freestyling rapping. When it was over, the three fans were handed gifts by the members, gave the seven of them high fives and went back to the audience. 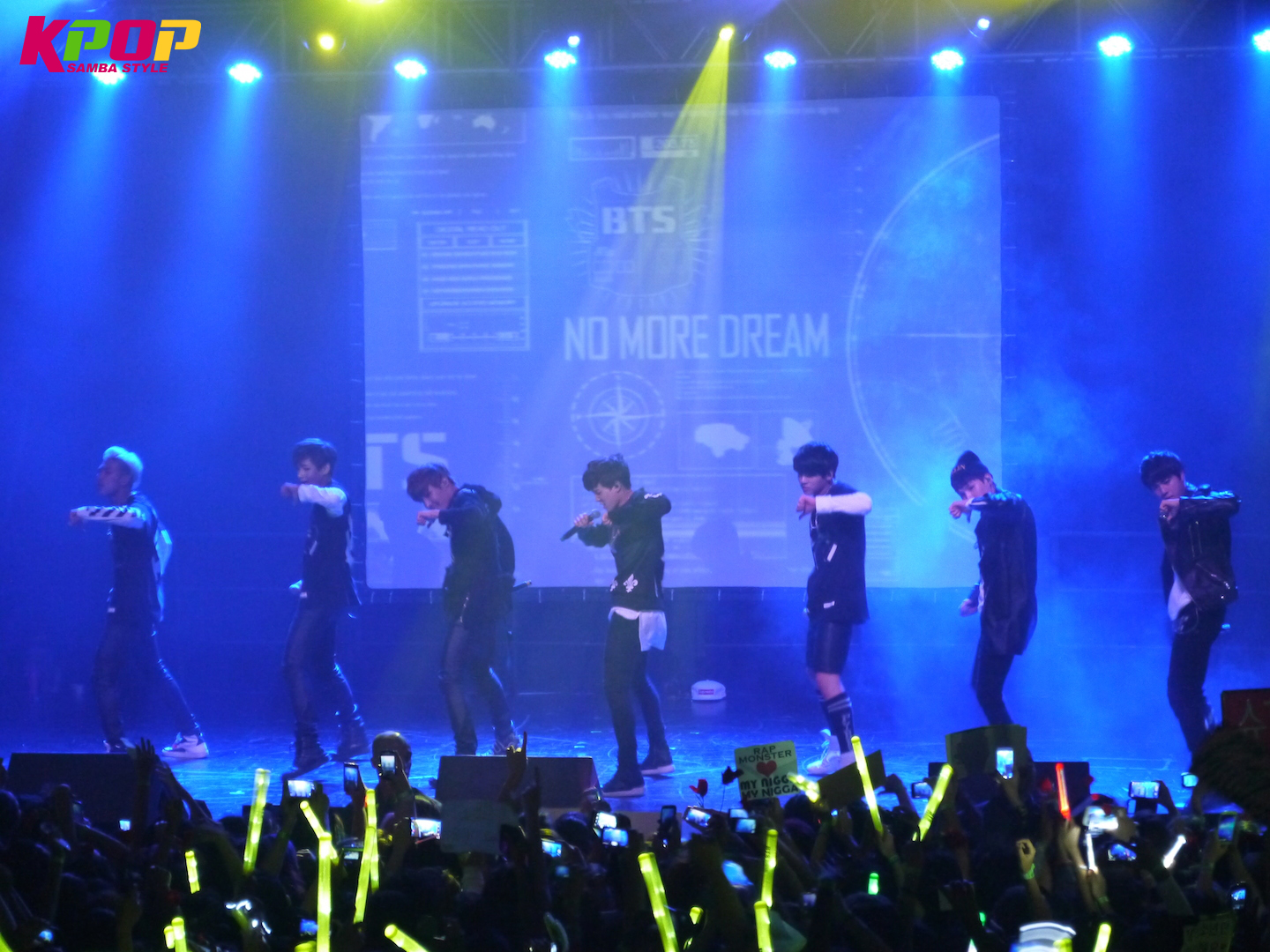 The members talked a bit more about what they learned about Brazil. Jimin cheerfully danced samba and V talked about the Amazon and how he wanted to visit the rainforest. Jin mentioned that the World Cup in Brazil was unforgettable. Along these comments, the next activity was introduced: the Quiz Show. The MC explained that the winner of the quiz would deliver a gift to a fan that would be picked at the end of the game.

Question: Here in São Paulo there is a Korean neighborhood. What is the name of this neighborhood?

Suga and Jimin raised their hands. Rap Monster started chanting Jimin’s name and fans followed him in a chorus, while others chanted for Suga. The chanting for Suga got stronger, but when he was chosen to answer the question he explained that he didn’t even know what to say, and that he only raised his hand to be mischievous, making everyone laugh. Jimin then replied “Bom Retiro” in Portuguese, which is the name of the neighborhood.

Question: Brazil has one of the seven wonders of the world, which one is it?

Question: During carnival there are big parades of samba schools. In two states the largest parades happen. Which are they?

V, Suga, Jungkook and Jimin raised their arms. Rap Monster once again encouraged the public to chant for Jimin, but this time it was Suga who ended up answering. He correctly said “São Paulo and Rio de Janeiro.”

Jin, Jungkook (jumping excitedly), J-Hope and V raised their hands, fighting for a chance to answer. Jimin also raised his hand in the confusion, but Jungkook was chosen and answered “Cataratas do Iguaçu” (Iguazu Falls).

Question: During June, Brazil has a large cultural festival in the northeast region, where we have traditional dishes and performances. What is the name of this party?

This time V and Jin tried to answer, but most of the audience chanted for Jimin, again with incentive from Rap Monster. Jimin correctly answered “Festa Junina, yoh!” (June Festival), thanking Rap Monster and then throwing a playful kick in the direction of V.

Question: What is the food that has ingredients like black beans, pieces of pork, sausages and bay leaves?

Question: There’s a region where a large gathering of young people takes place during a holiday in October. The region teems with celebration and shows during the season. Where is it?

J-Hope raised his hand loudly announcing his own name, then answered “Porto Seguro”.

Question: Brazil is known for having the largest expanse of tropical rainforest in the world. This area is located in the northern region of the country. What is its name?

Jin got it right, saying “Amazon” in English.

Question: If you want to eat the real Brazilian Pão de Queijo (cheese buns), which state do you have to visit?

Question: Brazil is full of natural beauties. What group of islands is the most famous and considered the most beautiful by tourists?

Rap Monster said “Fernando de Noronha” and “obrigado” (thank you), with his pronunciation garnering praise from the MC.

At the end of the quiz, Jimin was the one who won most points. A fan was picked from a raffle and took the stage, where Jimin made ​​charming gestures before kneeling and gifting her a flower bouquet and a t-shirt signed by the members.

After the activities with fans, the performances resumed. A pleasant performance of I Like It was accompanied by animations on the screen with “like” icons and Facebook posts from the members related to the lyrics. After I Like It, chairs were placed on the stage for the Just One Day performance.

The following performances had as much impact as the ones that came before and with every song the public bustled with increased enthusiasm. BTS performed Attack on Bangtan, Jump and Boy in Luv with skill and confidence, and the audience went wild with each track. 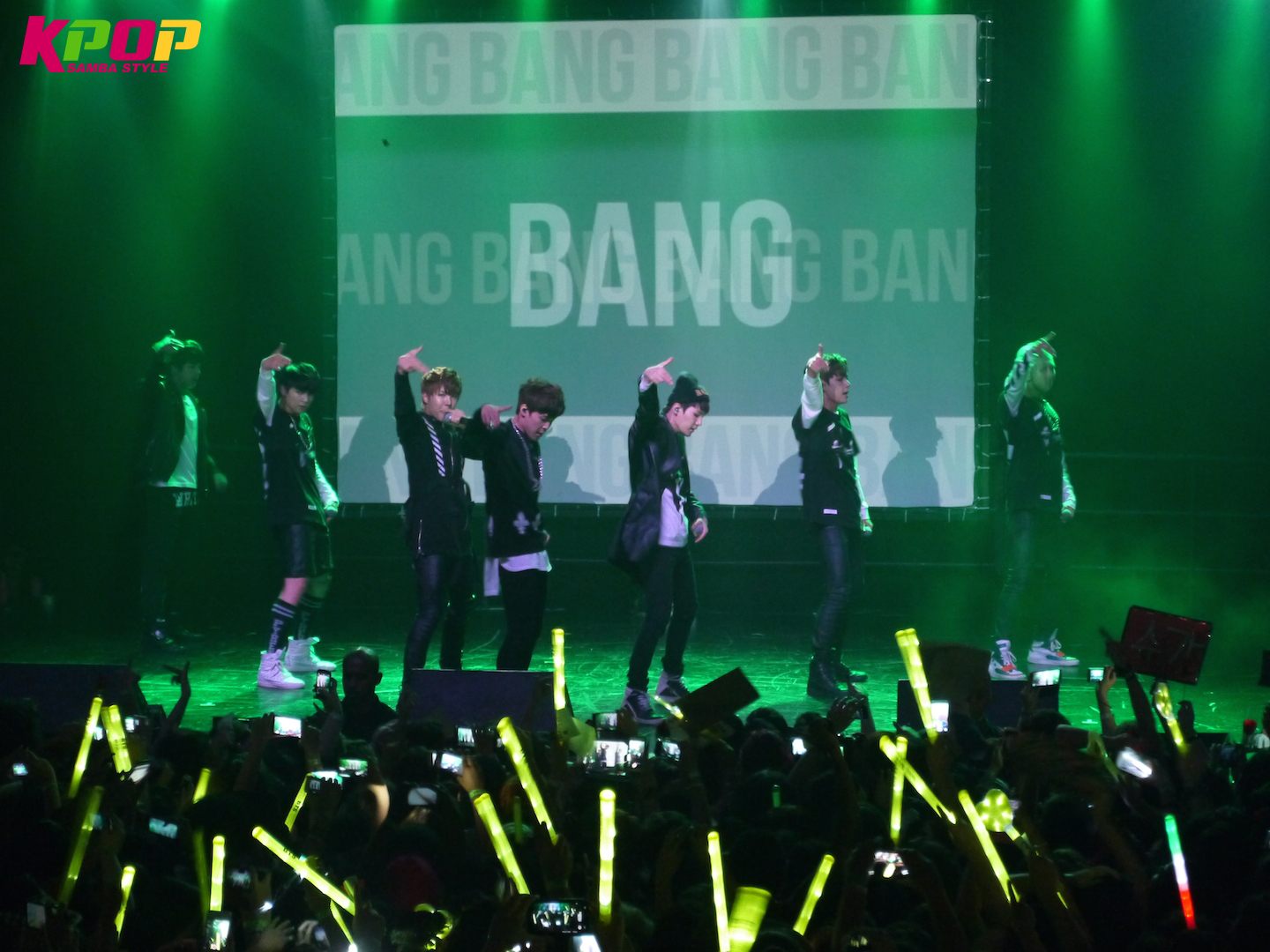 At one point of the show, Rap Monster said he was previously concerned that the amount of fans would be low in the fan meeting and that he was very grateful to see a full house.

The final thanks by BTS were filled with excited shouts of “São Paulo” and “obrigado”, while the audience expressed their love. After the show was over, the group left the stage and the fans who would participate in the high five part of the fan meeting were instructed to remain in the venue, while the rest of the audience and the press would have to leave. All fans were visibly pleased with the event and will certainly keep in their memories this great first meeting with the charismatic and talented group that is BTS.

Stay tuned for the future posts here on KSS, where we’ll post videos and more pictures from the show!